Sputnik across the Atlantic today 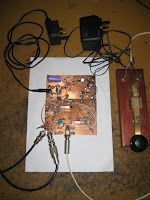 This afternoon Andrew G6ALB, Ted G4NUA and I got together to finish building the "Sputnik" transmitter for 15m based on old Russian valves of the same type used in the first Sputnik satellite in 1957. These were given to us by AA1TJ. Andrew G6ALB did all the building work but I was the "air tester" as his CW is, he says, worse even than mine.

After a few false starts with the PSU arrangement we fired up the transmitter into Andrew's inverted-L antenna and had almost immediate success with a QSO (following our CQ) with K1GDH (Ed) near Cambridge USA who was running 5W and gave us 539.

A second Sputnik rig is being built now and all being well we will be on the air on Oct 4th (Sputnik Day) to try for some more QSOs.
at 19:26

You guys make it seem too easy ;o)

That really is fantastic. Thanks for the great news and photos.

Good for all you Gentlemen!
I hope to operate you in Sputnik Party (Oct 4 to 26). Sorry I will use FT817 only (1 watt or 500 mW) to a simple wire antennas in home or suburban garden-house. Since I knew, some Russian QRPers prepared to operate in Sputnik Days. R3DAU and RN3AUS both assembled "Sputnikers" TXs using valves and xtals from Michael aa1TJ (TNX!) Other RU opeators will use any home brew or "firm" radios. Yuri UA1CEG will use old USSR military valve RX with inserted home made TRX-unit.
See you soon. Do svidania, beep-beep, 72!
Oleg (Mr. 72) RV3GM

As Michael (AA1TJ) says, you do make it look so easy. This type of work inspires me to keep learning CW, so that one day I can enjoy the simplicity and elegance of this sort of radio operation.

It is excellent fun bringing Russian, US, UK and other hams worldwide together in a positive way. Nice to think that valves used in missiles aimed at each other in the Cold War end in bringing friendship and joy. CW is a wonderful mode if you want simple equipment capable of DX.

I would have loved to have been involved in this project. I will try to have a listen on 21.060 over the coming weeks.

I worked 'over the pond' on Saturday. I had a QSO with N1WPU in Stockton Springs, Me, gaining a 539 report from Ted. I was running a standard RockMite 20 on 14.058ish MHz at 264mW output to a 4 band vertical antenna! Milliwatting is great! 72 Colin

Roger, Do you have the PSU circuit?

Mike has sent me a pair of valves so I'll try to have a TX up this w/e (yes bit late but ho hum..)

I have a small box of about 20+ subminiture russian tubes and I only wish I knew how to use them.

Is there anyone who can help me identify and use these interesting devices?