Just got a screen grab from G3WCB 101km away showing my QRSS30 beacon signal being received at his QTH near Windsor. Mine is the lower trace in which you can see "BM" (part of XBM). It is not strong, but there. I will leave the beacon running with around 50uW ERP during today.

A few hours later G3WCB got me stronger with the XBM very clear on the screen.

Henny van Elst in Holland was also seeing traces at the right frequency, but too weak to positively identify.
at 09:54 0 comments 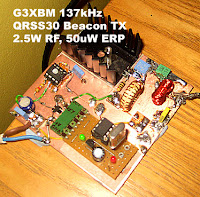 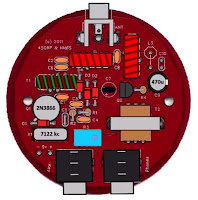 The Four State QRP Group is offering the new "HamCan" transceiver kit for sale at just $30.  It is a 2 transistor crystal-controlled CW transceiver, delivering 0.5-1W TX power with enough sensitivity and selectivity to receive plenty of signals. They claim it is a minimalist yet good performance transceiver. The kit features a high quality PCB, low parts count and fast and easy building. It is claimed to be an excellent kit for first time builders. It has been selected as one of the ARRL Midwest Convention's Buildathon kits.

Recent tests with earth electrodes at VLF have got me wondering about a simple QRSS HF/VHF beacon TX powered entirely from the rectified mains hum and other crud coming from a couple of earth rods in the ground.  Not sure of the available power, but I suspect it would be in the 0.1 to 2uW region, maybe more. This may be enough to drive a low voltage QRSS beacon for example. You can buy power harvester ICs these days for this purpose, but with a step-up mains transformer there may be a volt or two available at a few tens of uA and that alone may be enough to drive a keyed oscillator. The ultimate in free power beaconing!
at 23:18 1 comments 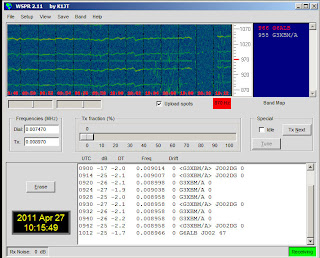 This morning I successfully decoded a VLF earth mode WSPR signal from G6ALB at a distance of 3km. Signal was quite strong, but for some reason the WSPR software refused to decode it (apart from once) despite clocks being reset at each end. This is my best WSPR DX reception on VLF so far. Andrew was running 40W to an earth electrode antenna. I was copying him on an earth electrode antenna although the WSPR signal was stronger later on the 80m square vertical loop in the garden.

In the afternoon I used my wife's laptop and WSPR decoded every time at -16/-17dB S/N, a very decent signal. There is a video showing the VLF WSPR set-up if you want to see it.
at 13:11 0 comments

G3XBM is off to Mars

NASA is collecting names to be put on a microchip that'll be on the Mars Science Laboratory rover heading to Mars in autumn 2011. The rover has special CW indentations on its wheels spelling out  JPL (Jet Propulsion Laboratory).
To add your name/callsign go to http://marsparticipate.jpl.nasa.gov/msl/participate/sendyourname/
at 19:21 2 comments

David G4AKC has been on his bike and working some excellent DX (like VK/ZL) on SSB and CW on 20m from his bike parked up next to the seaside in Blackpool. He uses and Alinco DX-70 on battery power with a  home made top loaded 3.5m long vertical against a tuned frame, and operating "over the sea water".  He says several QSOs were possible at the 1W level. See http://www.qrz.com/db/g4akc .
at 16:33 2 comments

Just a couple of outings on 10m WSPR this week, but some excellent reports from 5 continents using 5W and the small halo antenna. Interesting to see what must be Doppler shift drift on both the Reunion Is and Australian reports, presumably because of moving F-layer over the equator?
at 21:20 6 comments

28MHz getting too easy?

For the first time in several weeks I put my WSPR beacon on 10m this morning. Without any effort, the 5W and the halo got reports from the Middle East and Australia. With the solar flux regularly above 100 now, I'm finding that 10m has moved into its "easy" phase when worldwide DX is becoming easy.  Also, with the Es season just days away now, the European activity will be plentiful and WSPR reports from Europe with microwatts certainly probable.
at 13:15 4 comments

There is a nice article on the NASA site about the recent upsurge in activity in solar cycle 24. See http://science.nasa.gov/science-news/science-at-nasa/2011/14apr_thewatchedpot/ . No-one has, to my knowledge, changed their views that this cycle will be a low peaked one. However, every solar cycle seems to be different and we can live in hope for a while yet.
at 22:12 0 comments

When testing with utilities assisted earth mode in recent months I seemed to be getting weaker signals at 8.76kHz compared with my tests at 0.838kHz last summer. So, today I decided to go back and recheck results at a lower frequency at test sites 1.6, 2.6, 4.5 and 5.1km away from the 5W QRSS3 transmitter at home. Test locations were rural fenland roadsides, a National Trust car park and 2 roads in the next villages.

I used the same TX as at 8.76kHz, but divided down by a further x8 to 1.095kHz using the 4060 divider. The receiver was a horizontally orientated 30turn, 80cm across, series tuned loop into a low impedance MPF102 FET preamp with a drain circuit peaked at around 1.1kHz and emitter follower into PC running Spectran.
My initial test at 1.6km was a total failure - no signal visible at all in Spectran at 0.73Hz bandwidth. Then I realised that I had BOTH the garden earth electrodes in use at the TX (neither connected to pipes). A phone call to my wife and one wire was connected to the pipework in the house with the other still connected to the earth electrode at the bottom of the garden some 20m from the house. The signal then appeared at good strength.

Signals were received at all test locations indicated, but there was no signal visible (in QRSS3 bandwidths at least) when moving away from the roads into nearby fields or at some other test locations where pipes were absent (or plastic). At one location I rested the loop within 2m of one of the fenland water courses, but nothing was detected. The image attached  is the signal at 4.5km, which is strong in 0.79Hz bandwidth. Even stronger signals are possible with more optimum positioning, but I keep having to move my loop to avoid it being crushed by oncoming farm tractors! I do get some odd looks too.
My conclusions from the tests to day are:
There is one more test to do at some point that needs some assistance locally (I think within 10km to work). I want to try a long stable carrier test with someone looking in the very narrow bandwidths we've been using for the radiated tests recently. What I'm wondering is just how far from the pipes does an earth mode signal "leak"? Using Spectrum Lab with the very weak signal bandwidths like 0.4-2mHz, the weak remnants of a signal might just be visible some way from the "easy" utilities assisted coverage area.
The remaining tests I want to do still with earth mode are:
This class of experiment is not in the same league as those being done by the radiating VLF DXers, but fun nonetheless, especially as anyone can do this sort of test without NoV or special permits needed.
at 16:52 0 comments

Heathkit from 50 years ago 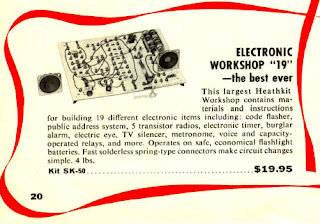 Dave G3UUR pointed me in the direction of the 1961 American Heathkit catalogue in which I found the EW19 electronic workshop kit. My memory had this as the EW1, but I must have got this wrong. My mum and dad bought me this for Christmas 1961 and it was this that got me started in radio as a hobby.  The Medium Wave radio was used for my first DXing late in the evenings. Also, the simple MW transmitter (using the crystal earpiece as a mic) got me across the house - my first transmissions.
at 17:02 3 comments

There will be an extra transmission with the Alexanderson alternator station SAQ on 17.2 kHz on Thursday April 14th 2011 at 12:45 UTC with tuning up some time before.   The transmission is directed to "The 5th European Conference on Antennas and Propagation" in Rome, Italy. There will be no QSL verification of this transmission.
at 12:36 0 comments

An odd ladybird in a London park 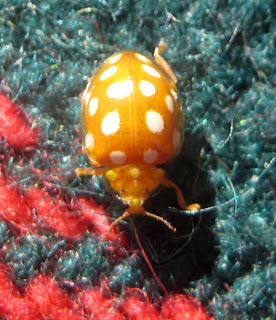 During a picnic in London's Springfield Park today, a very strange ladybird (family name Coccinellidae) came to join us. I've seen red ladybirds with black spots and vice versa, but never a yellow one with white spots! Anyone know what sort it is?
at 17:44 3 comments

The complete Bell System Technical Journal from 1922-1983 is available on line and searchable. See http://www.alcatel-lucent.com/bstj/ .

Chris G3XIZ will be active on VLF again this evening and overnight on 8.9766616kHz although the start time is not yet known. My VLF on-line grabber is already on in readiness, as is the grabber at G3ZJO. Chris has recently been improving the match to his VLF loading coil and antenna and is working on a new variometer.
at 15:10 0 comments

The latest RSGB news reports that G8CYW and G8KPD have set up a new UK record for optical DX over a distance of just under 90km in NE England using SSB and FM with a design that appeared in a recent RadCom.
at 14:59 0 comments

Another good morning on 28MHz (10m) today with WSPR reports from 4 different Australian stations plus RA9 and G's by tropo (I assume at 250km).  I was also copying VQ9JD on WSPR.
at 13:15 2 comments