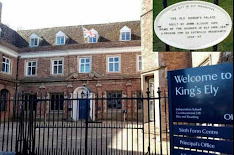 Right next to Ely Cathedral is the Bishop's Palace, used as such until the early 1940s. For a while it was a hospital (my dad who was a Pathfinder in Lancasters had his appendix removed here as a precaution). Later it was a Sue Ryder home. Now it is the 6th form centre for the King's School, Ely. It was built in the 1400s.
at 08:48