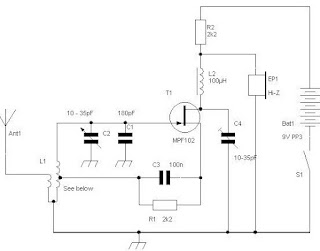 This is one of the most simple designs that  you will ever find for 80m or 40m RX. It will readily scale to 160m or 60m. I went on to make a transceiver version based on an idea from W2UW (SK). Imagine that - a complete transceiver using just 1 FET (see the FETer).

Hi Roger,
over the last few days I have been building the VK3YE phasing SSB transceiver you showed on a previous blog.as I was intrigued by the design. Unfortunately, despite the vfo running, the audio amp has gain, and the inductor resonances were checked using my nanovna, no receive nor transmit was achieved. I even purchased an audio transformer and other bits to get close to the circuit values, something I never do normally as I prefer to build from my extensive junk box collection.
I remember many years ago, I gave up building circuits from Practical Wireless that never worked due to printing errors. I later found ‘errata’ columns published months later saying so, but by then I had lost interest. Nowadays, I only build from supplied kit manufactures. This latest was an exception. I think some of these simple circuits are lucky ‘one-offs’ sometimes that often cannot be reproduced by others, due to component tolerances, layout quirks, and some obscure component characteristics.

BTW, despite running 1watt wspr on all three of the currently used 40mhz freqs, I have had not a single spot. Yet 28mhz and 50mhz from the same rig (three band fan dipole), I get dx spots. That first day when I worked S59F on FT8;was a rare exception as I have heard no-one since.
Enjoy your hols!
73 Ken g4apb

My Echolink now works, but I realise why I lost interest. Nobody seems to be on. I tried calling through the most promising repeaters in the...