If you can find these, they can be converted to the 70cm amateur band, but they are hard to get hold of these days. TX power was 50mW. Perhaps they appear at rallies from time-to-time or on eBay? 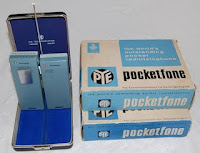 My first project at work was converting these to 12.5kHz channel spacing. This was a task set by the late Mike Gotch, M0IMG.

At the time I had no idea Mike was a keen amateur. Years before he had been a pirate and lost his licence I believe. In later years he was a keen 6m man. He retired early to care of his partner, who had cancer. Mike died as a result of the after-effects of a stroke.

The 12.5kHz version was never introduced commercially, but the exercise was a good one for me. The PF1, a product of the 1960s, transformed communications for the UK police. It was in 2 units, one for RX and one for TX. Even now, it still looks good.